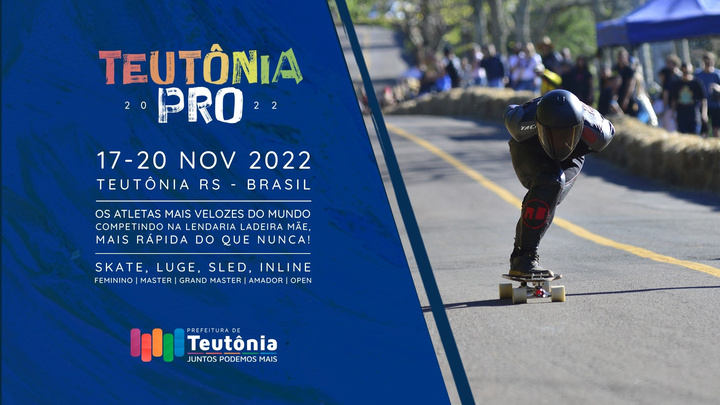 Skatedownhills is stoked to add the freshly paved Teutonia Pro, Brazils premiere race, to this years calendar. This is an International Skateboarding Championship on the fastest slope in the world, with the presence of 200 athletes from 16 countries, giving a show of speed on skateboarding. On-site food court and live band show until 9pm.

is one of the most world renown hills. An almost infamous race, two people battle head to head, drafting one another at speeds exceeding 100kmph. With the new fresh pavement, new top speeds and track records are bound to be set. Make sure you don’t miss out on the resurrection of one of the gnarliest downhill skateboard events on the planet.

The original Guinness Book of Records Top speed for on a downhill skateboard was set at Teutonia in 2014 by Brazilian legend Douglas Dalua. Now, 8 years on, with fresh pavement, who is going to set the new track record and top speed? Plenty of top racers from around the world are heading to compete, but can Brazil’s own hold it down on their home turf? Stay tuned to find out.
Excitingly, video’s have emerged of the new surface, with Brazil’s top riders getting as much training in on the hill before the event starts, check them out below.

This will be the one to watch.

Read more about the event here